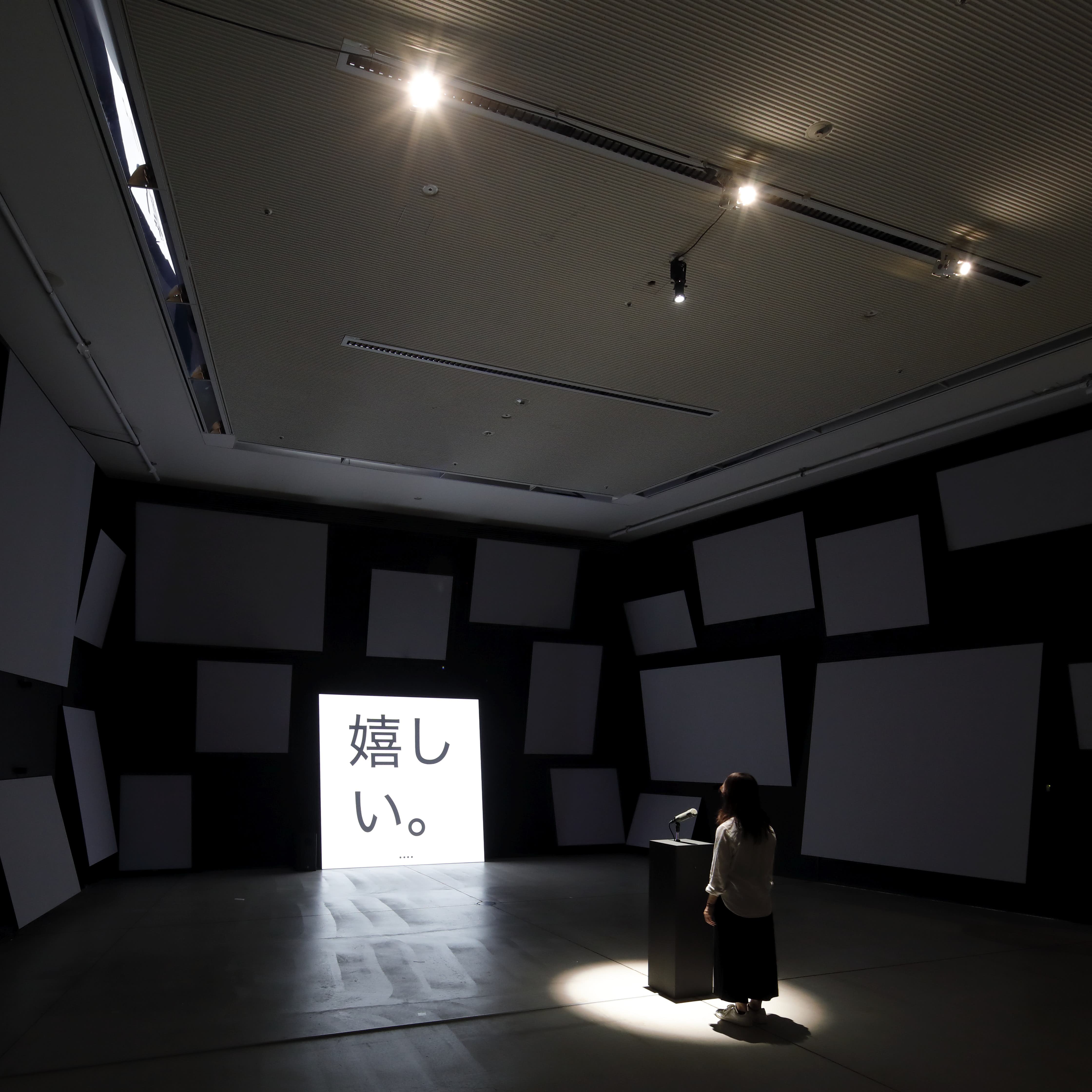 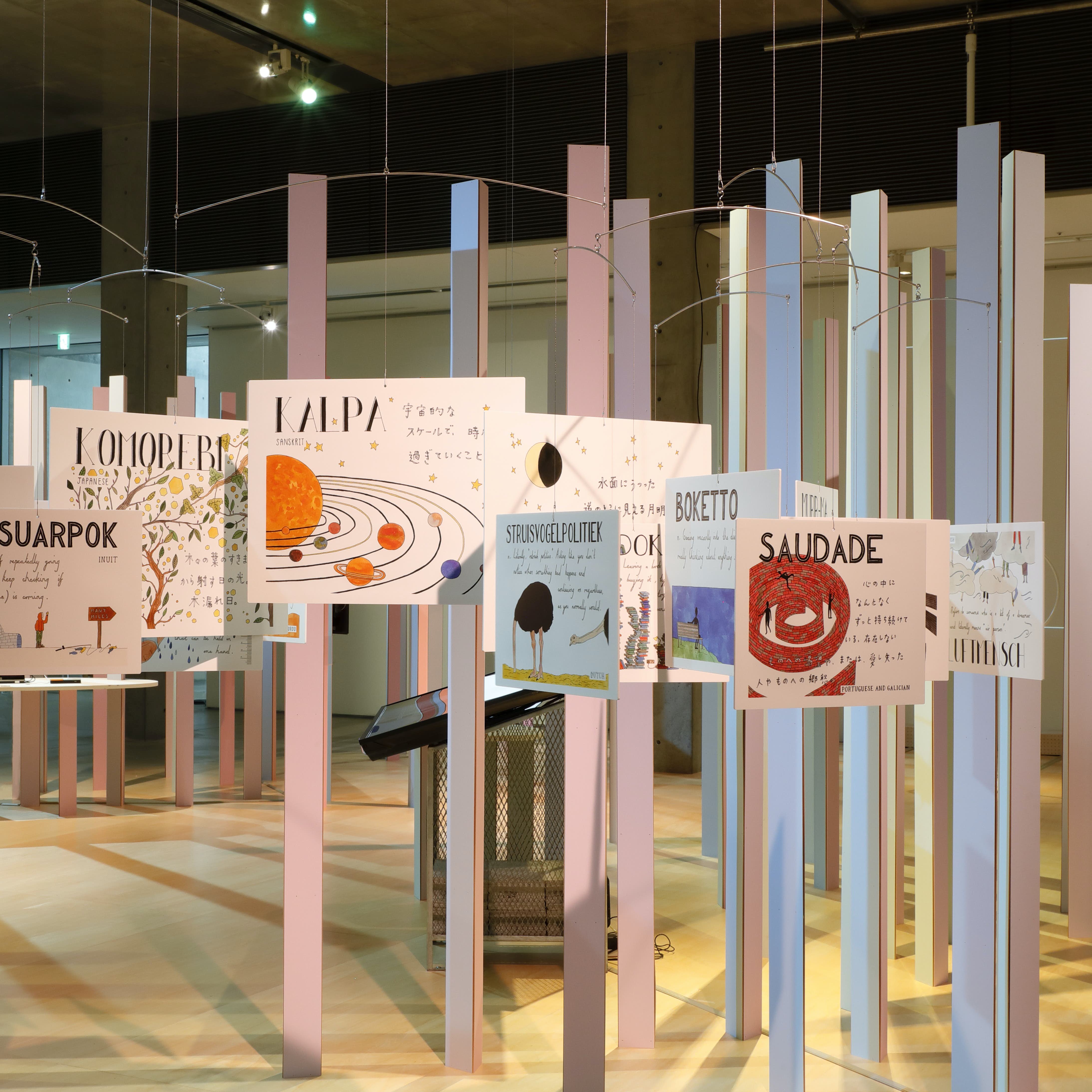 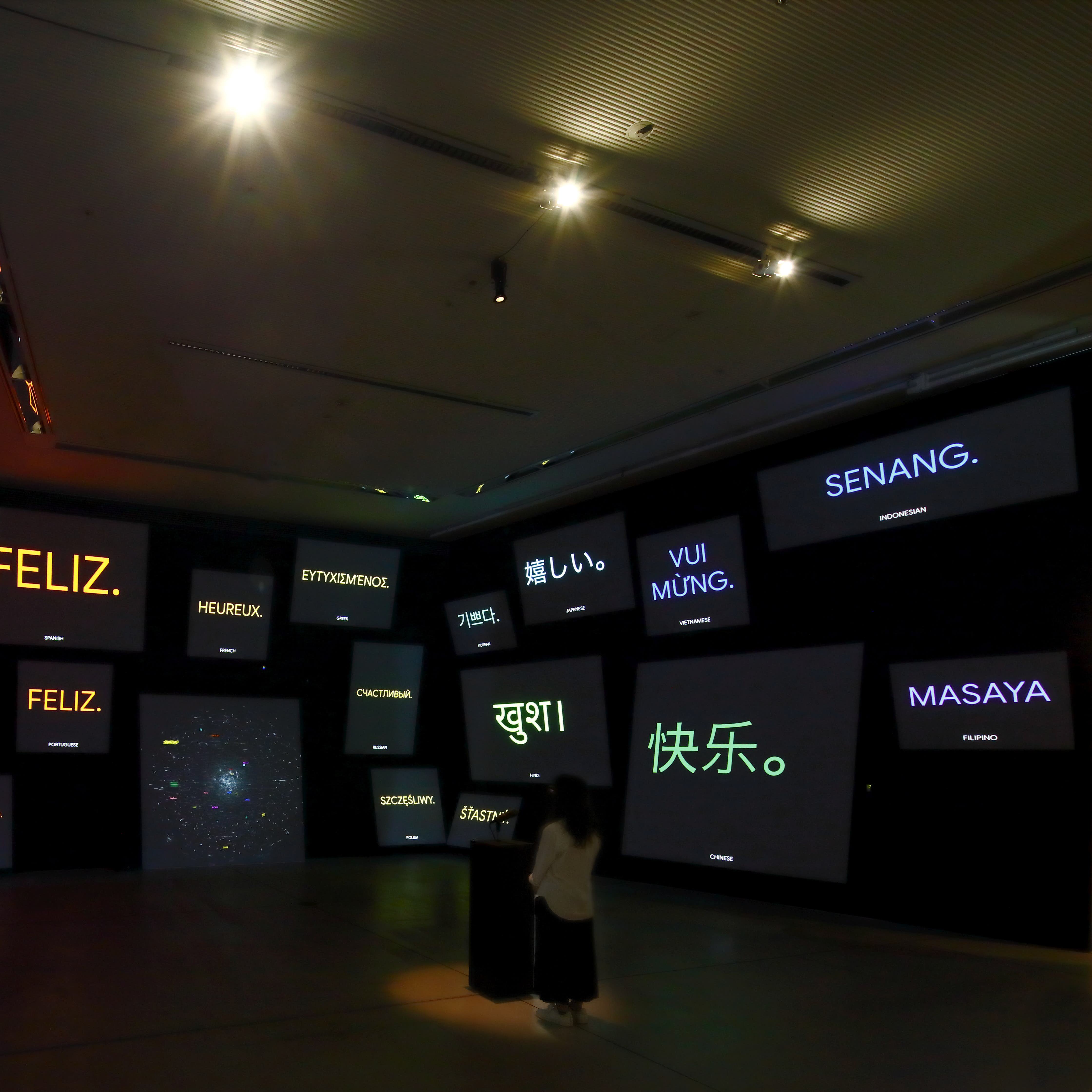 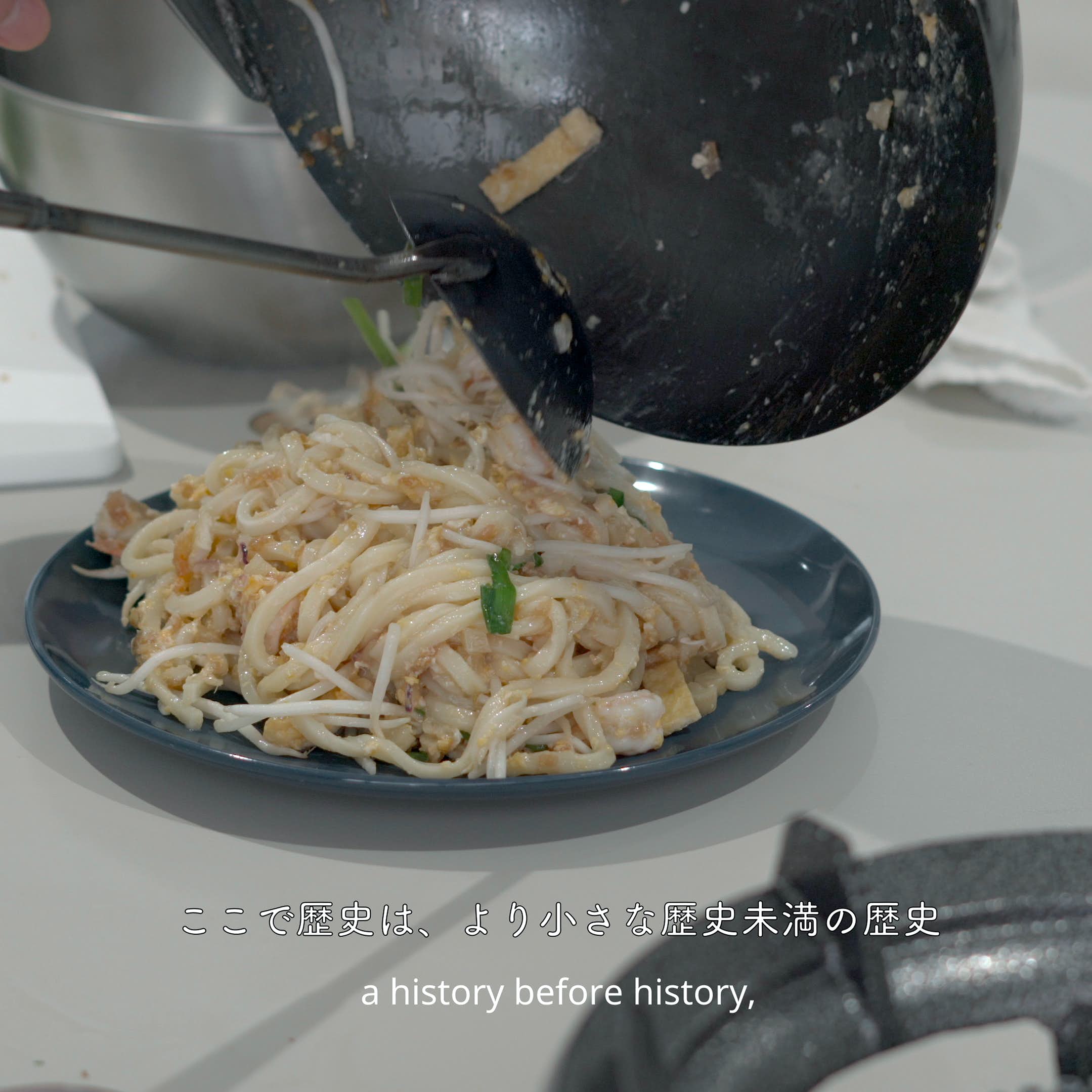 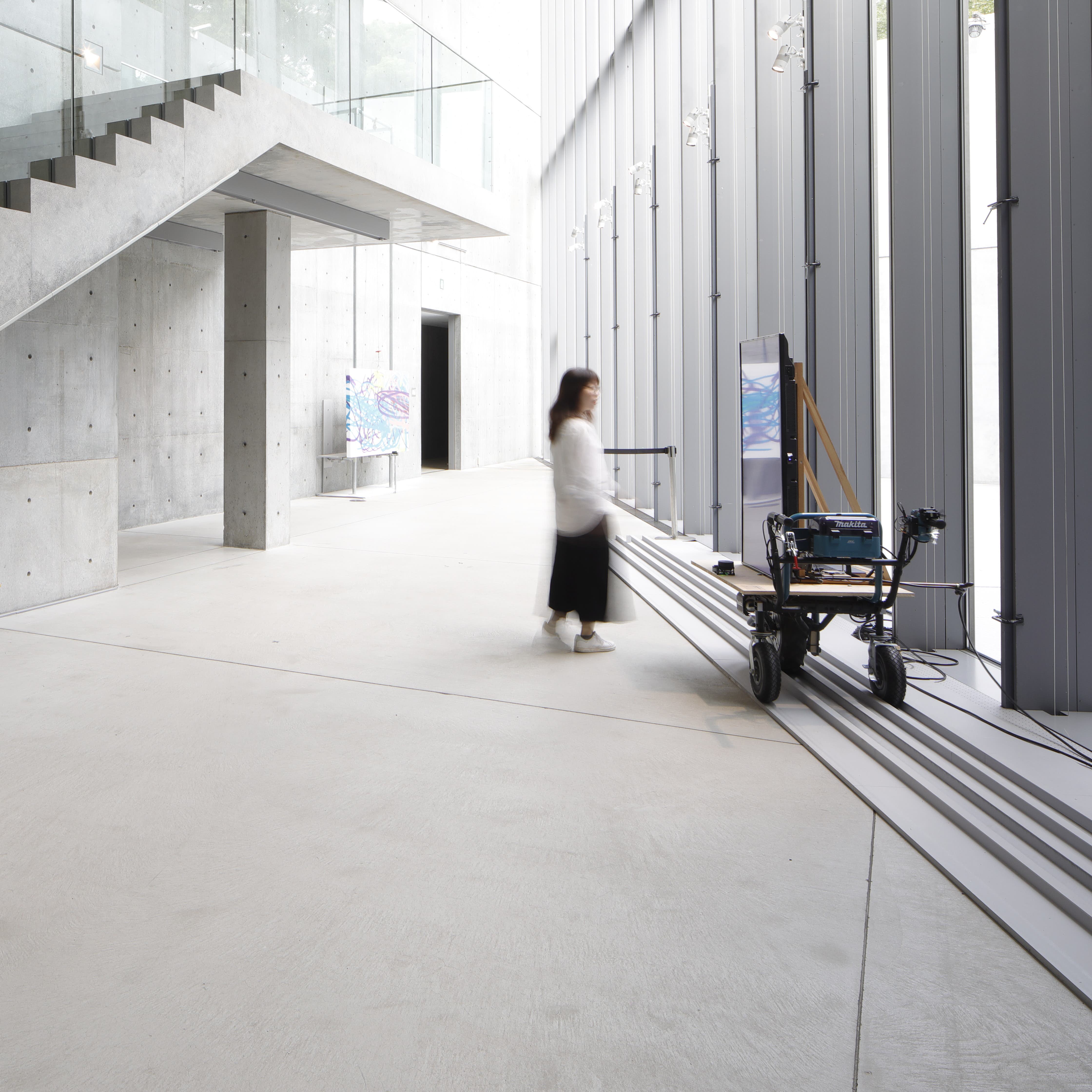 Is curation is translation or ‘tranquilisation'?

An exhibition 'traNslatioNs', held at 21_21 Design Sight and curated by Dominique Chen, metaphorically exploits the term “translation”. The venue is separated into several zones: 'Search for Ways of Conveying', 'Transmit with Body', 'Living with the Past', 'Between Things' and so on. Each eight zones are loosely divided by colorful triangular prism pillars, but these pillars don’t isolate each sound of works so it was difficult to catch each narration: the internal space of venue was filled with noise.
'Noise' — this word also resonates the name of the architectural firm who was charge in the space design, ’noiz' — can be 'translated' both in literal sense(chaotic sound) and in metaphorical sense（uncertainty）（*1）.
There is no noiseless translation.This difficulty as the nature of translation is instantiated above all in the area “Swim in the Ocean of Language” which includes Ella’ Frances Sanders’ ‘Lost in Translation' and a video statement ‘TRANS-PORT' for instance. The former is an extract from the picture book of untranslatable word around the world, and the latter is Chen’s curatorial statement translated into several language every word or phrase. Simultaneously, however, “Found in Translation”（2020）by Google Creative Lab + Studio TheGreenEyl + Dominique Chen, suggests the practical possibility of translation and on deep learning technology and its limit with a graphically expressed interrelations of languages in translation.（*2）
Translation is torn between such impossibilities and possibilities; sometimes the former falls into ideology and the latter take form in practice, and vice versa. 'Translation Zone’（2019）by Kosuke Nagata, whose title was derived on Emily Apter’s book, shows what forms in 'translation’, or say more literally, 'appropriation' of recipes of home cuisine from each local culture among structuralist translatability, which Nagata calls it 'desire for global language', the practical translatability, and historical untranslatability. This video narrates the structural semblance on cooking process and historical difference on cultural aspect between Asian ‘fried rice’ variants: 炒飯 in China, ข้าวผัด in Thai land, Nasi Goreng in Indonesia, and etc. This dilemma is expressed as ‘friction’. after that theoretical observation, the narrator’s voice introduces a Singlish song in which these cuisines and names intermingle, and Nyonya cuisine, which roots on Peranakan culture, which was brought into Singapore by Chinese immigrants in 15th century and their descendants. This work focuses such life practices in this ‘noisy', that is ‘creole’ zone.（*3）
This 'friction’ or creole-ness are also found in-between our bodies, mentalities or individual emotions in those zones: ‘Translation' of sport sensations for disabled persons, various ‘dictation' devices, sign language ‘expression’ of unspeakably strange object, and graphic recording of subtle and private emotions and experiences.
In this exhibition, however, the term ’translation’ itself is already exploited in order to metaphor what should be naturally called ’transformation’ or ‘representation’. As Juliane Rebentisch says, if all aesthetic experience essentially consist in self-reflectivity with its representational signs, this exhibition should have had supposed to reflect critically the possibility of creole-ness or friction between its arbitrary ‘zoning’ or classification and translation of the term ‘translation’ itself in a curation.
When we as if naturally call the appropriation of the shapes and patterns of Jomon pots into today tablewares or calculation of status of pickles in a container or physiological temptation of sharks by artificial smell ‘translation’ and when we find the word ’translation’ in their caption papers has quotation marks, we'll notice they are reflecting the desire to translate and interprete the concept ‘translation’ itself.(*4) And such desire is what this ‘metaphor’ is grounded on. Exhibitions on translation ought to cast a reflection on this desire, and how curation succeeds to reflect or have followed this desire which fills vacancy between those translations.
'Translation’ as the theme arbitrarily translates meanings of ‘translation’ itself. We couldn't see the word ‘translation’ anywhere in the caption of Yang02’s ‘Couldn’t Seen Well’. When we see even a cynical allegories on impossibility of translation within this absence（or that noisy space by noiz）, we already filled this vacancy by ourselves. In this exhibition this meaning-filling ’self-service' can or should functions implicitly as ‘translation’, shouldn’t it? … Or, is also such this review a desire to arbitrarily metaphorize ‘translation’?
Each translation can be called translation only when it is life practice for/by/between concrete doers and its noisiness and frictions are reflected by themselves. We must not to forget that each translation is ‘illocutionary act’ in concrete contexts. The exhibition has a subtitle: 'Understanding Misunderstanding', but a slogan of this kind already always have optimistically sublimed the practical interplay between understanding and misunderstanding in translation. So it is de-noising or tranquilization what translates translation into metaphor.This review was automatically translated into Japanese by DeepL after written in English once.(*5)

*1 A word ‘Noise’ has Latin origin ‘Nausea’, which means seasickness. Kai Gohara argued etymological relation among noise and Sartre’s Nausea and La Belle Noiseuse in Balzac’s Unknown Masterpiece under Michel Serres’s discussion. Cf. Kai Gohara, ‘Somehow, noiseuse’ in Eureka 2012.3, Seidosha
*2 This graphical image of translation reminds us of Antoni Muntadas’s ‘On Translation: The Internet Project’. This work also shows image of interrelation of languages in a spiral shape. This spiral shape, however, is arbitrary symbol but ‘Found in Translation’’s automatically generated graphics are not symbol but visualization of metacorpus. And we should be careful not to think nor feel this graphic neutral. This metacorpus is based on vectorization of words and idioms in each language but this operation is directed and invisualized by Google.
*3 Also we can pay attention on the creole-ness of narration of the video. The narration, maybe dictated by Japanese male voice, is in English with non-native accent and not-English words are pronounced in original language (with maybe nonnative accent): 炒飯 or ข้าวผัด. This creole-ness inscribed in English narration reflects the status of English as Lingua Franca in contemporary art especially in narratorial video art.
*4 Why can I call practices in ‘Sports Guide Without Sight’ by Asa Ito + Akiko Hayashi + Junji Watanabe ’translation'? This display consists of video documentation of two practices: ‘感戦; feeling matches’ and ‘汗戦; experiencing matches’. The former shows how to manage to communicate between visually impaired persons and abled persons the feeling of seeing a sport match. For example in seeing wrestling, they hold one towel. Two persons who see the match are in charge of each wrestler and tug and draw the towel intuitively fitting the movement of wrestlers to communicate ‘the progress and power-negotiations of a game’ 'into physically-sensed rhythms and bodily sensations’. This ‘translation’ is not literally linguistic but I think it is adequately admitted to be called ‘translation’. On the other hands, I sense the incongruity in expressing Jomon-pots copying or physiological stimulation of sharks ‘translation’. What’s the difference? This intuitive difference corresponds to my desired translation of the concept ‘translation’. In this sense, the word ‘translation’ itself is deconstructive in such a context of its self-representation. As hinted in the latter part, I have a hypothesis for my criterion. In Austinian sense, translation is both ‘illocutionary' and 'perlocutionary act’. In ‘感戦’, the practitioners shares some promise and recognition of limit of this ‘translation’ practice, and within this finitude they do play a kind of representation of expressible contents and its inter-reflection. But shark-stimulation and copying of pot-shape seems to neither have such neither contents which convey contexts sharing between human and shark or users of each pots nor reflects critically of this arbitrariness of contexts, at least in the presentation in this exhibition. Translation is always also translation of the context which the translation act itself happens on between interested persons. In ‘汗戦’ video, such contexts are reflected by professional athletes. We must still pay attention , however, to how such description could be so neutral as to vouch the ‘translation’ or not and whether we reproduces exclusive professionalism under this ’understanding’ or ‘being convinced’. (‘profession’ have etymologically Latin origin ‘profess’, which means statement of religious belief.)
*5 On 2021 Jan. 4, with free license. Of course also the title and notes. But I exceptionally corrected about the proper noun and quotations, and some descriptions on etymology; and then the editors proofread some words to meet the guideline.
So I should report something about this writing. My mother tongue is Japanese and so my English should have some awkward expressions(I hope no grammar mistake). At the same time, during writing this review I always feel the ‘smatteringness’ in English generated by DeepL protocol too. To cope with its deviation that some phrase and nuances are often ignored or even inverted, I repeatedly restored and changed my expressions on DeepL interface. Some rewritings were judged on grammatical reflection but others were tried on just ‘at random’ until success. Presence or absence of quotation mark or punctuation often completely change the transformed words or sentences, but this is not grammatical change but re-generating by neuro-network black-boxed for users.
Rather, in such black-boxed simultaneous translation, our language is being getting transformed into differed form which is easy to translate for automatic translation. It is like that we repeatedly change an expression of saying to command a smart speaker. Within such services, our natural languages are being translated into executable code.
And furthermore, sometimes mistranslation is learnt by intentionally deviated teaching by users, as suggested in Nagata’s video. No longer we cannot naively recognize the graphic visualization in ‘Found in Translation’ natural and neutral.
Just in case I left the original English review below. By the way this website ‘Bijutsu-Techo Web’ carries automatic translation plug-in of Japanese articles into English and Chinese. 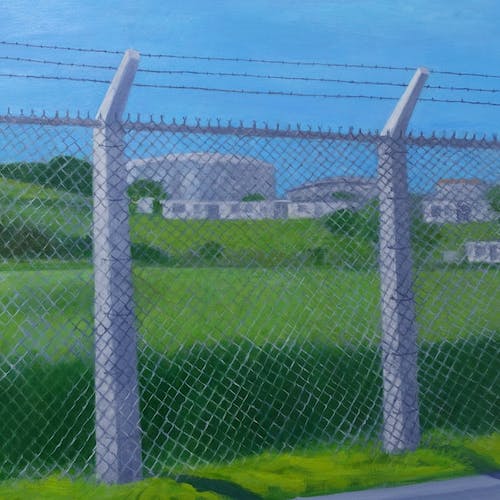 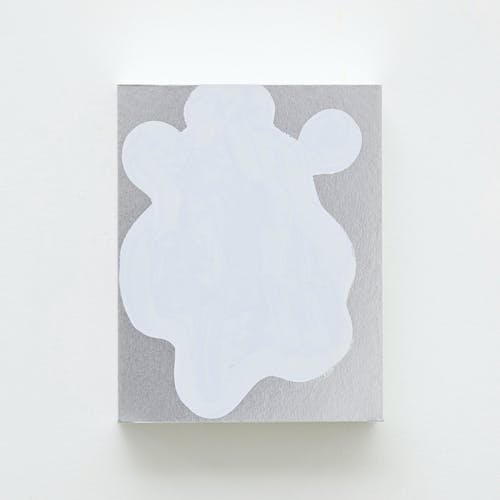 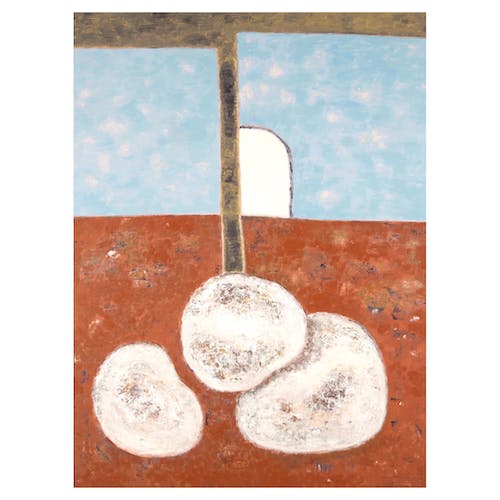 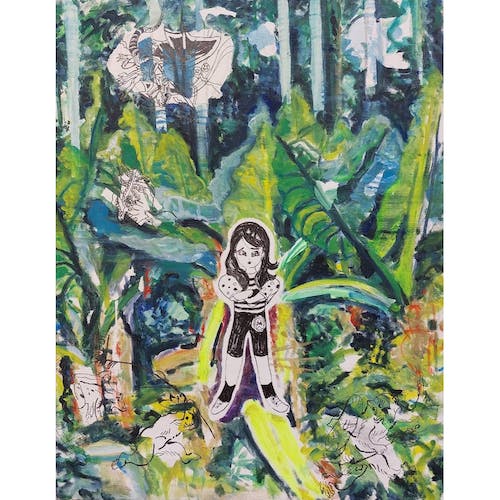